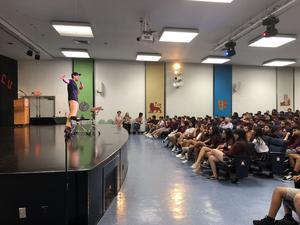 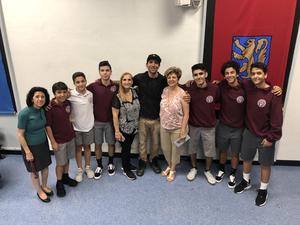 On Friday, August 31st the AGBU Manoogian Demirdjian School had an incredible visit from amazing musician, drummer, and Class of ‘98 alumnus Jacob Armen! Discovered for his drumming abilities at just 3 and a half years old he appeared on The Tonight Show with Johnny Carson at the age of 7. Soon after the offers came flooding in.

Jacob even caught the eye of Prince, who signed him to his record label Paisley Productions, (later to become NPG.) He also holds the record for the youngest drummer to land endorsements from REMO, Zildjian, and KAT electronic drums.

Now, Jacob has his own independent record label called JAAB Records and is releasing a brand new disc this year called “When Drums Conduct!”, featuring artists such as Djivan Gasparyan and Daron Malakian.

Upon his return to the school, Jacob was given a tour of his alma mater and was able to reminisce and see all the wonderful developments since his graduation. Being back on campus, Jacob was inspired and now, wants to give back and expand the music programming offered at AGBU MDS.

After the tour, Jacob met with the middle and high school students and performed an incredible piece on an instrument called the Santoor. In a heartfelt and emotional moment, Jacob shared with the Manoogian-Demirdjian students that looking back after all these years, feeling the love, and seeing all the amazing development, he was certain that his parents had made the right choice in declining some of the offers he received in his youth and instead choosing to send him to AGBU MDS. It was a beautiful moment that reaffirmed our commitment to our youth.

A statement from Jacob Armen:

To my AGBU MDS family: Thank you from the bottom of my heart for the warm welcome you all gave me during my visit to the school. It was an honor for me to return to a place that holds such a special place in my history. I am touched by the generosity of support and enthusiasm I was greeted with, from the faculty to the students. Thank you!