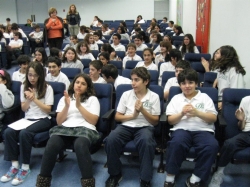 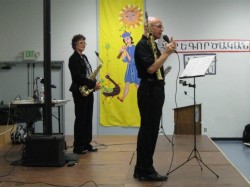 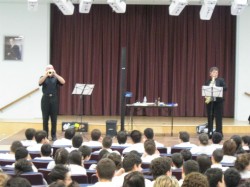 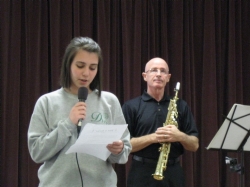 On Thursday March 19, 2009 a concert called “Bach to Beatles”, by two talentd musicians, took us on a voyage through musical history from the 1600’s to modern day. More...

On Thursday March 19, 2009 a group of talented musicians, Doug and Wendy Pullen, performed twice a concert called “Bach to Beatles” for DHS and 3-5th graders in our.  Sophomore Tiffany Esmailian for DHS and 5th grader Lori Patatian for the elementary introduced the group by saying, “This program will take us on a voyage through musical history from the 1600’s to modern day.  We will learn about the saxophone and the accident-prone inventor Adolph Sax.”

They discussed how music was written and then played pieces from several famous composers including Bach, Mozart, Beethoven and Debussy.  Then they moved into more modern pieces and gave the students a chance to clap along to more recognizable music.   This included “The Simpsons” theme song as well as some famous Big Band music from the 1950’s.  They ended their performance with a medley from The Beatles.  During this portion the students and teachers got very energetic and really enjoyed listing to the saxophone versions of these very popular songs.  When the performance was over Doug serenaded the students with Kenny G music while they quietly left the auditorium.

Overall it was a successful day and both groups of students enjoyed learning about the saxophone while listening to the different types of music.

We would like to thank the Music Department for organizing and Paradon Committee for sponsoring such an educational and entertaining assembly for our students.