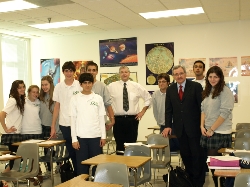 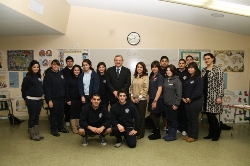 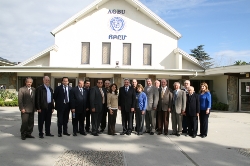 Mr. Oghassapian, of Armenian origin and a close friend of the AGBU in Lebanon, made it a point that he visits both AGBU schools in the greater Los Angeles area. On Monday February 23, he arrived at the AGBU High School in Pasadena with his entourage and was greeted by school vice principal Dr. Talin Kargodorian, Mr. Levon Keshishian, Director of Operations at the school and Mr. Yenovk Balikian, representing the AGBU.

Upon arrival the Minister was escorted to couple of classrooms where he met with students and discussed with them the purpose of his trip and his wish of meeting with the young generation of Armenians whose parents have come from Lebanon. He instilled in them the love of their country and wished them great achievements in their future. During his introduction of the honored guest, Mr. Keshishian told the students that "when our grandparents established themselves after the genocide in Lebanon, they would have never imagined that their grandsons would one day behold such high positions in the complex fabric of Lebanese government and politics and that Mr. Oghassapian is an example that such an impossibility become reality through dedication and persistence."

The honored guest toured the entire AGBU Alex Manoogian Complex and met with local AGBU Administrative staff and discussed the activities of the AGBU School and Center. He then gave those present a synopsis of the Lebanese current developments.
Mr. Oghassapian thanked everyone for the warm welcome he received and wished all well before departing the AGBU grounds.

After a warm welcome, the Minister toured the various sections of the school, stopping to meet with Advanced Placement students in the high school, where he specifically told them "You should be proud being in such an educational institution and the future is yours to be whatever you wish to be by taking in as much as possible from your teachers...I wish you good luck in your future..."

At the end of his tour the Minister was received in the school board room and engaged in discussions with AGBU and school officials regarding the Armenians in Lebanon, their welfare and the Minister's close relationship with the AGBU of Lebanon. The Minister expressed his admiration to the work done by the AGBU in general and the two schools he visited in particular, bid farewell thanking for the warm welcome he received at both locations.

Please click on the link below to view a complete photo album of the visit...
http://www.agbumds.org/apps/album/index.jsp?dir=departments/61193/06198&backLink=&backTitle=&rn=3442065